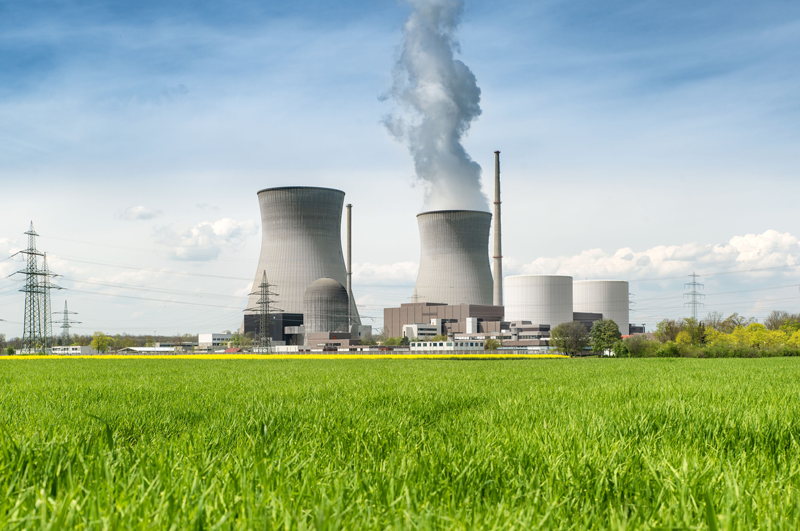 True or false? Living near a coal plant is “safer” than living near a nuclear power plant. According to J’Tia Hart, Ph.D., a nuclear engineer at the Argonne National Laboratory, a coal plant releases 100 times more radiation into the environment than a similarly sized nuclear power plant. Thanks to the HBO miniseries, Chernobyl, or the 2011 accident in Fukushima in Japan, people are often fearful about the safety of nuclear plants.

However, the industry is held to high safety standards and has regular monitoring by third-party inspectors. At the same time, it is a carbon-free energy source that is a viable option for electricity generation because it is a baseline source of energy, meaning it isn’t dependent on environmental conditions.

It is also often overlooked as “clean energy,” a term typically associated with solar and wind. The Nuclear Energy Institute (NEI) reported that in 2019 nuclear energy eliminated 476 metric tons of carbon dioxide emissions.

“And the supply chain isn’t at the mercy of foreign sources,” Hart points out.

The U.S. has a long-standing reputation as a leader in nuclear technology and energy generation. The country is the largest user of nuclear power at almost twice the generation capacity of the next country, France. Nuclear power generates about 20 percent of the electricity in the U.S. In Illinois alone, it accounts for almost half of total electricity generation, according to Hart.

“The U.S. has long been the leader in nuclear technology and energy generation,” she says.

“Others are competing to become the industry leader, specifically China, Russia and South Korea, who round out the top five after France, [and] are all constructing nuclear power plants internationally while the U.S. has no such projects.”

In October 2020, the World Nuclear Association, led by newly-appointed General Director Sama Bilboa y León, Ph.D., reported that nuclear reactors within the U.S. produced 809 billion kWh in 2019. Changes in electricity markets and zero-emissions credit programs have brought nuclear into the spotlight as states look for ways to reduce the carbon footprint of other energy sources.

The U.S. Energy Information Administration (EIA) reports that there are 96 commercial nuclear reactors at 58 nuclear power plants across 29 states. Despite the closure of eight plants since 2013, the increased output has been attributed to improved efficiencies. In 2016, the Tennessee Valley Authority Bar 2 Unit was the first new reactor in a decade. In Georgia, two new reactors are being built and are anticipated to open between 2021 and 2022.

The Office of Nuclear Energy projects that about 23,000 jobs will be available in the nuclear industry within the next five years. With women currently representing less than 20 percent of the 500,000-strong nuclear workforce nationwide, there is potential for the industry to become more diverse and inclusive by attracting women and other minorities to those positions.

Jhansi Kandasamy, chair of U.S. Women in Nuclear (WIN) and vice president of engineering for GE Hitachi Nuclear Energy, believes the career opportunities for women within the nuclear industry are limitless, despite misconceptions that there might not be enough flexibility from a work/life perspective because plant production is 24/7.

“The beauty of working in the industry, specifically at power plants, is that as long as you have the passion, you can do anything,” she says. “Whether you have a high school diploma or a Ph.D., you can be a technician, a data analyst, engineer or manager.”

Kandasamy’s experiences have been diverse. Early in her career, as part of the company’s “Fix It Now” program, she climbed into a 50-foot crane above the reactor to fix a lightbulb; another time, she had to troubleshoot a leaking valve so that the entire plant didn’t have to be shut down for a repair. Later, she found herself working in the chemistry department taking samples and analyzing chemicals to identify potential issues before they became problematic.

“The opportunities are boundless,” she says.

Case in point, Hart is a leader in the nuclear industry and doesn’t work at a production plant. She leads a program in the Strategic Security Sciences Division where she specializes in analyzing energy and national security topics to help government leaders form policies. She gathers information from a variety of sources, summarizes the issues, and assesses responses to different actions that U.S. leaders may take.

Argonne is a federally funded research and development center (FFRDC) through the U.S. Department of Energy with a budget of nearly one billion dollars. Argonne technology has helped clean environmental spills with its Oleo sponge that is designed to absorb oil and other petroleum products below the water’s surface. In a research discovery, the scientists found a revolutionary breakthrough to help the Chevy Volt’s lithium-ion battery last longer.

“We can’t rule out any specific type of energy; each has its role to play. Petroleum products are essential for gasoline, diesel and electricity,” Hart says. “Renewable energy is a great fit in certain areas of the country. I believe that nuclear power should be expanded domestically and have a role in domestic electricity generation.”

Nuclear energy has an important part to play in powering U.S. homes and businesses. With increased understanding of the environmental benefits and goals for net zero carbon emissions, the nuclear power industry is a top-ranking option for alternative and complementary energy sources already being utilized. As the industry grows, women have greater access to resources for enjoying a career in the industry.

“When you stand up to talk about nuclear energy as a mom and a daughter, there’s more credibility from that perspective,” Kandasamy says. “I’ve taken that to heart as a member of the Gender Champions in Nuclear Policy. We’re addressing a women’s perspective in nuclear [energy] through professional development and mentorship. Each year, during our conferences, we have 70 to 80 college students that we pay for and sponsor and pair with mentors, who are women working in the nuclear industry.”

Hart sums up the impact of diversity in the industry.

“We have significant problems facing our world,” and stresses that big ideas are needed. “We need diversity of thought to gather these ideas and that stems from participation from a diverse population. These are the people who will remake our energy systems, build our roads and discover new vaccines.”