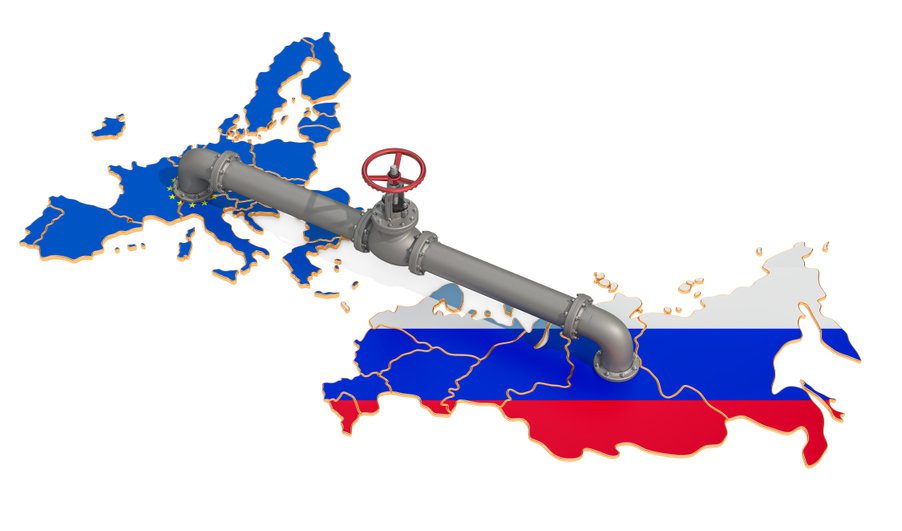 Russia’s invasion of Ukraine sent financial and energy markets into disarray around the world as governments in western Europe and the United States responded with sanctions.

Crude oil prices immediately rose to more than $100 per barrel, and natural gas prices in Europe were up 30 percent on Thursday.

President Biden, along with members of the European Union and the United Kingdom, announced on Tuesday the imposition of sanctions on Russia after the Russian military entered Ukraine. The sanctions target Russia’s financial services sector prohibiting them from trading in its debt on U.S. and European markets. Further sanctions were expected following Russia’s aggression on Thursday.

Germany, which had built an energy system during the last 30 years that relied heavily on oil and natural gas imports from Russia, halted its approval of the new Nord Stream 2 natural gas pipeline from Russia. Russia is the largest provider of natural gas (averaged 10.7 billion cubic feet per day) to EU countries delivered through pipelines in Poland, Germany and Slovakia.

Russia also sells liquefied natural gas (LNG) to the EU accounting for 20 percent of LNG imports. LNG from the U.S. stands at 26 percent, which has doubled since November.

Supply shortages have led to rapid price increases from $9 during the first half of 2021 to $28 during the last six months. Natural gas prices in the U.S. closed at $4.50 per million British thermal units on Feb. 22 on the NYMEX.

The impact on crude oil supplies and prices could be far-reaching.

Russia, which is not an official member of OPEC but has consulted with OPEC on production quotas since 2020, is one of the top three oil-producing countries, producing some 11 million barrels per day (b/d). The U.S. is the largest producer at 12 million b/d and Saudi Arabia is third at 10 million b/d.

Russia exports roughly 7.5 million b/d, and an average of 733,000 b/d during the last six months is imported into the U.S., according to the Energy Information Administration, which makes it the third-largest importer behind Canada (4.3 million b/d) and Mexico (766,000 b/d). Russian imports exceed those from Saudi Arabia, which averaged 500,000 b/d.

Disruptions of oil, natural gas, and petroleum products from Russia are expected.

Oil markets have been nervous for quite some time as tension escalated in Europe, and global oil demand exceeded supplies.

OPEC+, which includes Russia, increased monthly production quotas by 400,000 b/d in August, but some countries have failed to meet their goal for various reasons. The International Energy Agency reports a 900,000 b/d gap between OPEC+ target and actual production.

Meanwhile, back at the White House, the Biden administration continues to throw roadblocks in front of the U.S. petroleum industry as his agencies push an agenda designed to reduce domestic fossil-fuel production.

The countries in western Europe currently are feeling the pain and paying the price for their dependence on foreign countries to provide the energy they need to warm their homes, fuel their economy, and defend against tyranny.