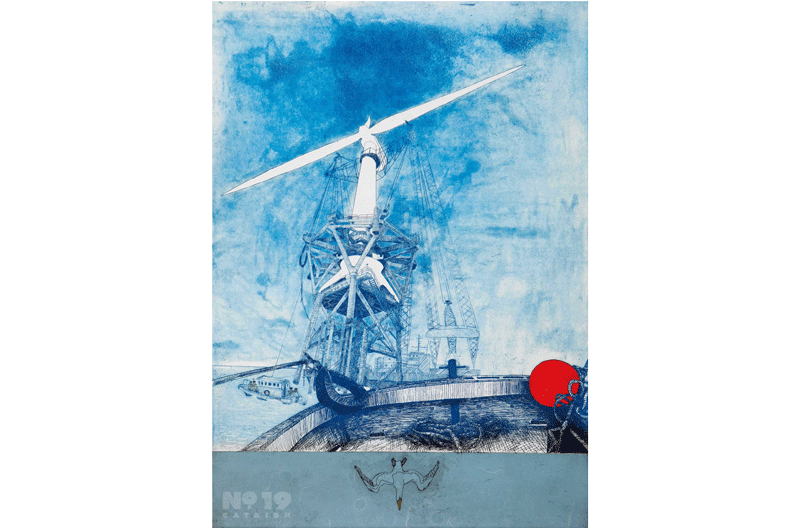 “It’s a very different world out there, which we know nothing about onshore.”

“I’ve been very fortunate throughout the years to get avenues and opportunities to go into these offshore installations and places, where the public [is] not allowed. It is a privilege which I find absolutely . . .” Sue Jane Taylor trails off and then despite the eloquence of her [published writing] says, “Words are difficult for me because I’m a visual artist, but I try to disclose it in my work.”

Her fascination with life offshore and the men and women who inhabit that world has never waned. “Being on a platform is so inspirational; it’s the power of nature. It’s people working in these extreme and remote environments and how they react to them. It’s a psychologist’s dream; it’s a fascinating observance of human nature.”

“Artists have always had this fascination for this symbolic, the concept of the source. There’s the source of the black gold and it’s out there in these remote platform installations,” she says, creating an aura of mystique and exoticism not often associated with the petroleum industry.

In 2006, she was contacted once again by Jacquelynn Craw, this time for a different type of offshore commission. Talisman Energy had become involved in the Beatrice Project, an offshore wind farm prototype project, in the Beatrice oil field. At its nearest point, approximately 13.5 kilometers off the coast in the North of Scotland, it’s the oil field closest to the shore in the U.K. sector, and can be seen from land.

Calling it a “truly European project,” Taylor traveled to Denmark and Germany, where the components were being built and assembled, and observed the men and women at work manufacturing the blades in Lunderskov, Denmark , and also Husum, a maritime town in northeast Germany, where the generator for the 5M turbine – at that time, the biggest in the world – was being manufactured.

“It was just fascinating being involved in that project because it was basically oil technology being transferred and used for renewable energy.”

Excerpted with permission from the author. Breaking the Gas Ceiling: Women in the Offshore Oil & Gas Industry by Rebecca Ponton (Modern History Press; May 2019).