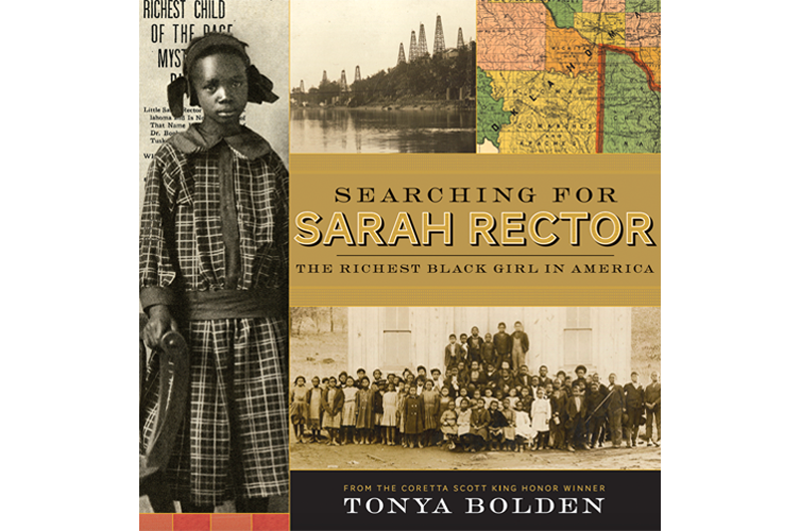 “Dear sir: After reading your account of the little girl, Sarah Rector, I am writing to state that I heartily approve that part of your statement which says she ‘cannot be hid.’” That’s how John A. Melby of Gary, Indiana, began his letter to R. S. Abbott, publisher of the Chicago Defender, a weekly paper. Melby’s letter was dated March 15, 1914.

The day before, the Defender had run a front-page story on twelve-year-old Sarah Rector, raising the frightening possibility of a kidnapping. It punctuated the piece at points with the question, “Where is Sarah Rector?”

Melby urged Abbott to do whatever it took to solve the mystery – even hire a detective “to get at the facts.” Why were Melby and the Defender so worked up over Sarah Rector? Would they have spent the same amount of ink on any other girl – or boy – gone missing?

We’d like to think so, but we know that Sarah wasn’t just any girl. She was being ballyhooed as the richest Black girl in America – some said in the world. The scuttlebutt was that Sarah had an income of $15,000 a month – the equivalent of more than $300,000 today.

Just as amazing: How Sarah Rector came into her riches.

It’s a story full of ups, downs, and turnarounds, followed by crazy goings-on amid a heap of crimes. But the telling can’t begin without a bit of backing up to some facets of American history that are often overlooked.

Sarah Rector was born on March 3, 1902. Her home was a weather whipped two-room cabin near the tiny town of Twine, I.T. (I.T. stood for Indian Territory.) There, Sarah and her family were known as “Creek freedmen” – that is, Black members of a nation of Indians commonly called Creeks.

Mvskoke (mus-KOH-gee) is what these Indians called themselves – Muscogee (and Muskogee) in English. This union of several tribes long included the Euchee, the Tuskegee, and the tribe whose name the union bore, the Muscogee.

As for the men and women, girls and boys, bearing the blood of African tribes, Creeks called them Estelvste (es-stih-LUS-tee) – “the Black people.”

Some Estelvste lived free among Creeks, making their way as artisans, farmers, and merchants, but most labored in bondage. They were cooks, cleaners, and cowboys. They chopped cotton, plowed cornfields. While there’s no such thing as “good” slavery, there are accounts of some Creek slaveholders treating their captives like kin or “hired hands.”

Others, however, dealt out body and soul brutalities. They broke up families in sales. They believed in physical abuse, like whippings, sometimes fifty lashes long.

Slaveholding by Creeks didn’t begin in I.T. It had gone on in their ancestral homelands in Alabama and Georgia, homelands wrenched from them.

That happened mostly during the 1830s, after years of warfare between white settlers and Indians. Through a combination of bribery and brute force the U.S. government removed almost all members of the Five Tribes of the Southeast (also known as “the Five Civilized Tribes”): the Creek, Cherokee, Chickasaw, Choctaw and Seminole nations. This was done so that whites could have their rich land. (In parts of north Georgia, that richness included gold.)

Adapted excerpt from Searching for Sarah Rector: The Richest Black Girl in America, by Tonya Bolden, appears by permission of Abrams Books for Young Readers, an imprint of Abrams © 2014.

To see more of the author’s work, visit www.tonyaboldenbooks.com.

Editor’s note: Sarah Rector (1902 – 1967) gained her wealth when Standard Oil Co. leased her land, later part of the Cushing-Drumright oil field, in 1911 and, two years later, independent operator B.B. Jones hit a gusher that produced 2,500 barrels of oil a day. Rector received royalties of $300 a day ($7,885 in today’s money). She has been quoted as saying, “Money will make you rich and comfortable, but it still won’t make you free . . . especially if you’re Black.” To learn more about Rector, see Episode 39 of The African American History Is AMERICAN History (AAHIAH) Channel on YouTube.